27 September 2019 marks Google’s 21st birthday. To celebrate its all these years in business, we’ve highlighted Google and Google’s parent company, Alphabet Inc. A company that once started in a garage has grown to be a part of a new company with a market capitalisation of over $861 billion. Below you will find a timeline outlining the transition from Google to Alphabet and a few big achievements along the way.

Andy Bechtolsheim issues a $100,000 check and Google took its first breath. With the money, the founders open their first office in Susan Wojcici’s (now CEO of YouTube) garage in California.

Google becomes Yahoo’s search engine provider, which lasts 4 years. They also launch “Doodles,” which are the changes made to Google’s logo on its homepage for different occasions.

Google launches its initial public offering (IPO) with a stock price of $85.

The first smartphone to launch Android hits the market and Chrome becomes available.

Google reorganises into Alphabet, Inc., which is a holding company of which Google is just a division.

From Google to Alphabet

In 2015, Google restructured their company creating a new parent company, Alphabet Inc. Alphabet describes itself as a collection of companies. In the 2015 Founders’ Letter, Page said that Google was operating well, but created Alphabet to make the company cleaner and more accountable. They wanted to be able to operate in different sectors and believe that the creation of Alphabet allows them to run things independently that aren’t closely related.

A collection of companies?

Alphabet breaks down its financial reports in two categories: Google and “Other Bets.” Companies and products that fall under the Google category are Google subsidiaries such as Google Ads, Google Cloud, Chrome, YouTube, and Android. Other Bets include businesses such as Calico, Verily, Waymo, X, and CapitalG, to name a few. In Q2 of 2019, 99.58% of Alphabet’s revenue came from Google and 0.42% came from Other Bets.

In their financials, Alphabet breaks down their revenue by region including the United States, Other Americas, APAC, and EMEA. At the end of Q4 2018, the company saw revenues of over $136.8 billion, a 23% increase from 2017. Out of this, almost half came from the US at 46%, which may be surprising since Google alone is active in 50 different countries. The second largest sector in terms of revenue was EMEA at 33%, followed by APAC and Other Americas representing 16% and 5.6% respectively. 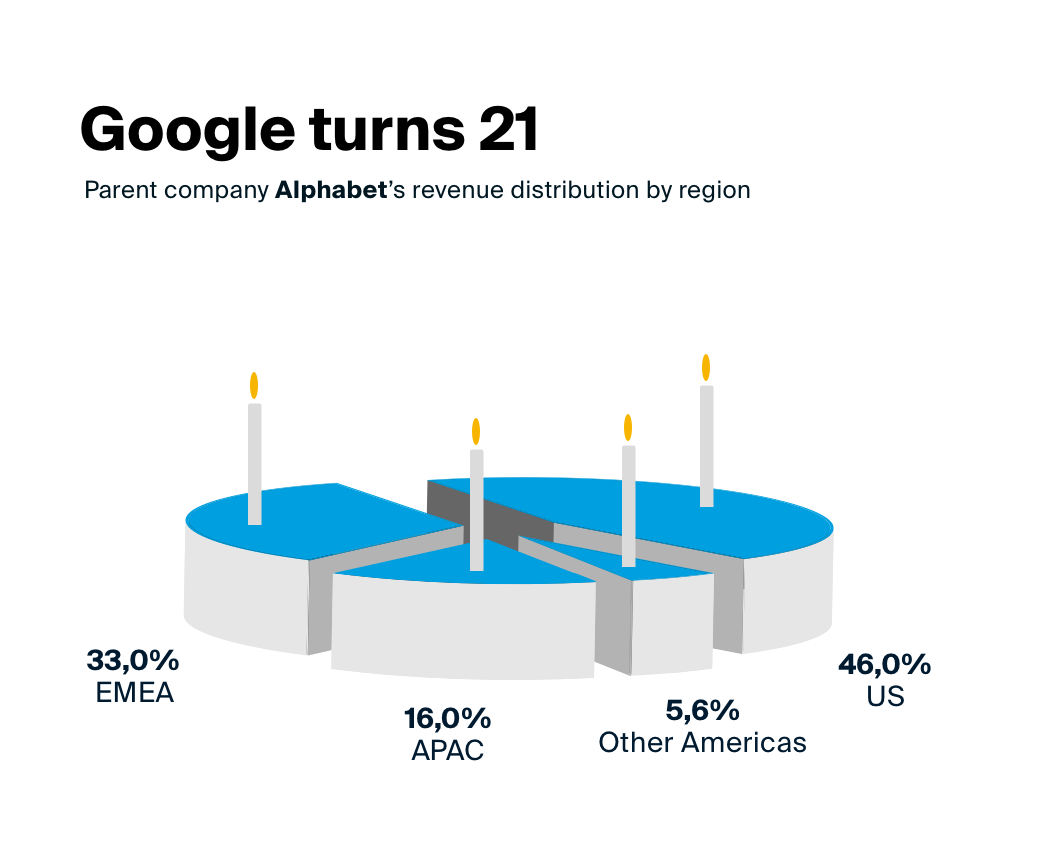 What’s the difference between GOOG and GOOGL?

Alphabet trades on the NASDAQ under the two tickers GOOG and GOOGL. Shares that trade under the ticker GOOGL are categorised as Class A and GOOG shares are categorised as Class C. There are also Class B shares, however these are held by founders of the company and are not publicly traded. The main difference between the different classes are in terms of voting rights. Class A shares receive 1 vote, Class B shares receive 10 votes, and Class C shares receive 0 votes. The Class A and C shares were created from a stock split in 2014. The reason for the split was so that Page and Brin could preserve control of the company.

Note: The information in this article is not written for advisory purposes, nor does it intend to recommend any investments. Please be aware that facts may have changed since the article was originally written. Investing involves risks. You can lose (a part of) your deposit. We advise you to only invest in financial products which match your knowledge and experience.

10 fun facts about trading on the US markets