Ant Group is on track for a record-breaking IPO

UPDATE: Both the Hong Kong and Shanghai listings of Ant Group’s IPO were suspended on 03.11.20.

Jack Ma’s fintech behemoth Ant Group is one of the most highly anticipated initial public offerings (IPO) this year and it is expected to start trading in the first week of November. Ant Group is aiming to raise $34.5 billion in its upcoming dual-listed IPO, which would make it the biggest IPO of all time.

In this article, we provide some background information about Ant Group, discuss the details of the IPO and share how you can invest in Ant Group through the DEGIRO platform.

Ant Group is a fintech company and affiliate of Alibaba. Its origins date back to 2004 as Alibaba’s online payment service called Alipay. It then separated from Alibaba as a separate entity and changed its name to Ant Financial in 2014. Ant Financial then again changed its name in June 2020 to Ant Group to emphasise that it is more than a financial company.

Today, Ant Group is engaged in digital payments, asset management, lending and insurance through its several companies. Some of them include:

Ant Group will go public through a concurrent IPO on the Shanghai Stock Exchange’s STAR board and the Hong Kong Stock Exchange. The stock ticker in Hong Kong will be 6688 and 688688 in Shanghai. The numbers are significant as in China the number six is considered lucky and the number eight is often associated with wealth.

If the offering is oversubscribed, the company may exercise a so-called greenshoe option, which would allow more shares to be sold than initially planned. In this case, an additional $5.17 billion could be raised.

Trading in Hong Kong is expected to start on November 5. At the time of writing, the date for the Shanghai debut has not been announced.

Ant Group is expected to raise up to $35 billion through its stock market debut. This amount would surpass the record set by Saudi Aramco, the world’s largest oil company, with its $29.4 billion IPO last year. If all goes as planned, below are the five biggest IPOs of all time: 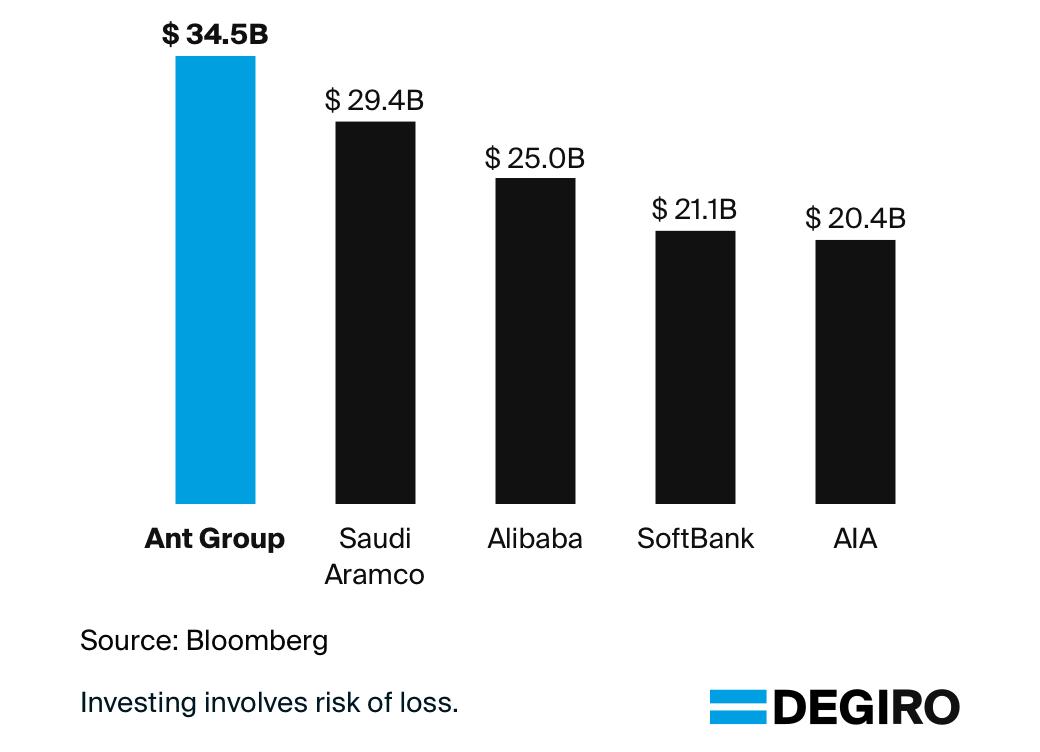 Would you like to add Ant Group to your portfolio? While Ant Group will be listed in Shanghai and Hong Kong, we only offer access to the Hong Kong listed shares. Once Ant Group starts trading, you can buy shares for the low fee of €10.00 + 0.06%. Please see our Fees page for more information.

Please be aware that we do not offer live price information for the Hong Kong Stock Exchange and only the end of day prices are displayed.

Alibaba sets a new record and launches an IPO