Most traded stocks by country: February 2022

February was a grim month given the Russian attacks on Ukraine, triggering one of the worst security crises in Europe for a long time. We can only hope for the people of Ukraine for a quick de-escalation of this terrible war.

So far in the financial markets, some things we've seen are surging oil prices, gold hitting its highest level since June, the euro dropping to a nearly seven-year low against the Swiss franc and Russian assets losing over $250 billion in stock market value. Both European and US equities ended February in the red, with the EURO STOXX 50 and S&P 500 posting losses of 6.00% and 3.14%, respectively. 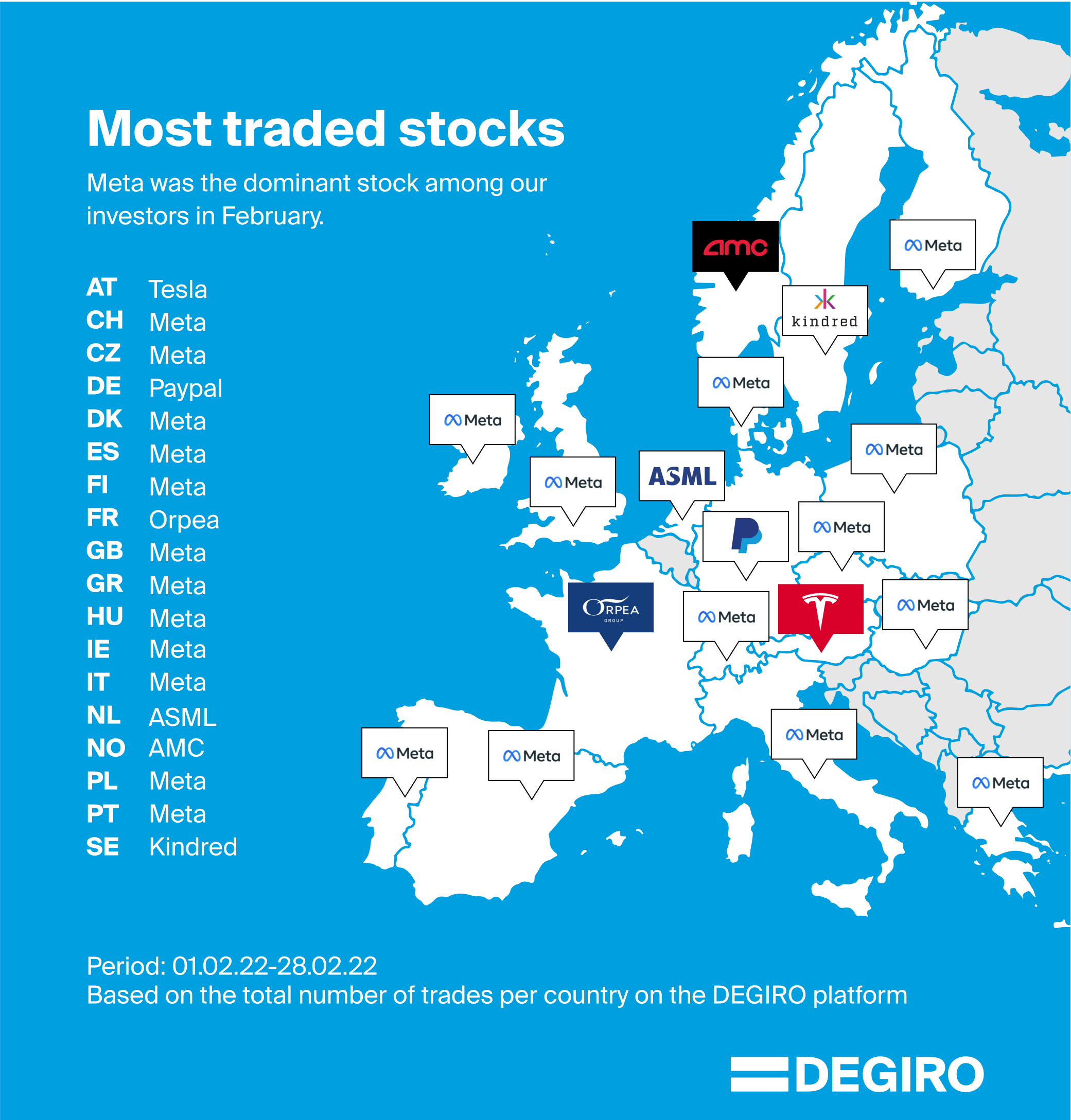 In February, three companies made their debut on our map, being traded the most for the first time. Since they are new, here’s a brief introduction of each:

Orpea is a France-based company that focuses on dependency care operations, such as retirement homes, follow-up care and rehabilitation clinics, psychiatric care and home care. It has an extensive network of 1,156 facilities across 23 countries.

A scandal surrounding Orpea has recently broken out, resulting in the French government investigating the company and plenty of negative media attention. At the end of January, a book called Les Fossoyeurs (‘The Gravediggers’) by journalist Victor Castanet was published. The book details a three-year investigation describing the experience of patients in Orpea’s retirement homes alleging mistreatment, including rationing meals, and some patients left without care for days. By February 1st, Orpea lost around half of its market value from the time extracts of the book were published on January 24th. Prices continued to decline, dropping another 4.54% in February.

Another company new to our map is one you might be more familiar with. PayPal is an American fintech that focuses on online payments and has a substantial global reach as it is available in 200 countries and 25 different currencies. It also has a large userbase and processes a significant number of transactions. In its Q4 2021 results, PayPal reported having 426 million active consumer and merchant accounts and 40,006 payment transactions per minute.

PayPal reported its fourth quarter and full-year 2021 results on February 1st. It showed that its total payments in the fourth quarter increased by just 23%, the smallest increase in two years, and the company also cut back on its 2025 expectations for active accounts. Investors did not take well to the news, and its stock price dropped by nearly 30%, its biggest intraday price decrease on record. PayPal’s stock was down by 31.55% at the end of the month.

Last but not least is Kindred. Formerly known as Unibet Group, Kindred is a Malta-based online gambling company active in Europe, Australia and the US. It operates with nine brands, including 32Red, Bingo.com, Casinohuone, Kolikkopelit, Maria Casino, Highroller, Unibet, Vlad Cazino and Ottokasino. Each brand offers something different, from sports betting to casino games.

Kindred also published its fourth quarter and full-year 2021 at the beginning of February. The unaudited report showed a 33% decrease in revenue in the fourth quarter of 2021 year-over-year, but yearly revenues in 2021 increased by 11% compared to 2020. Stock prices were down by 1.68% at the end of the month.

The companies that saw the biggest price movements out of the stocks on the map last month were AMC and Meta.

Out of the stocks on the map, only AMC and ASML ended February in the green, and out of the two, AMC’s 17.43% increase made it February’s winner. While AMC posted a sizable monthly gain, prices were up and down through the month. AMC is a so-called meme stock, and with meme stocks, stock prices are typically volatile since they are largely not based on the company’s performance.

Facebook parent Meta was on the losing end, with prices plunging by 32.63% last month. Meta reported its earnings on February 2nd, showing flat growth in monthly users in the fourth quarter from the period prior and an operating loss of $3.3 billion from investments in the metaverse and virtual reality. Following this, prices tumbled as much as 27%, erasing around $251 billion in market value, the biggest single-day loss in market value for a US company in history.

Most traded stocks by country: January 2022

Most traded stocks by country: 2021