Most traded stocks by country: January 2020

In order to keep you informed and shed some light on what other clients of DEGIRO are trading, at the beginning of the month we will report the most traded stock for each country that we are active in from the month prior. There was a lot of movement in the automotive industry last month, where Tesla is challenging traditional automotive companies. The biggest movement came from the small cap FuelCell, which released Q4 figures that were disappointing to some investors. 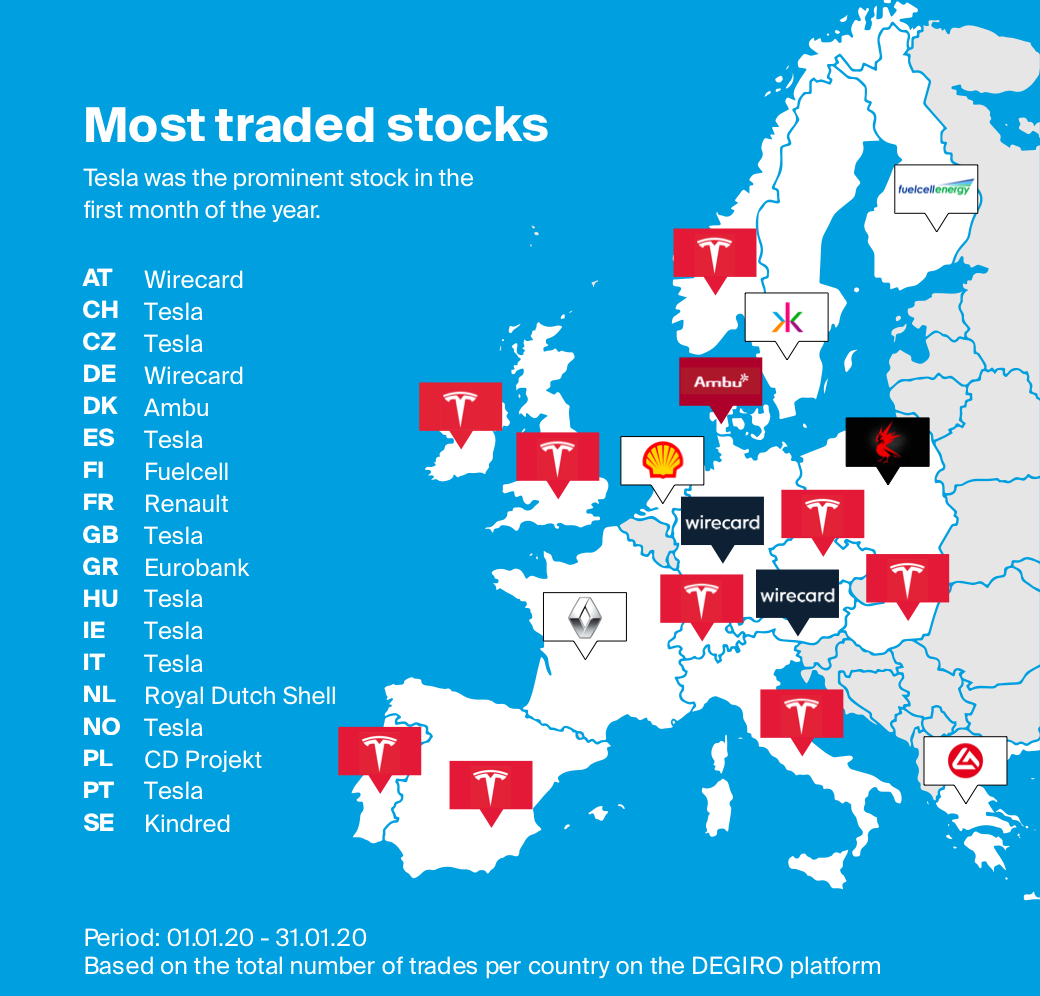 Tesla (ISIN: US88160R1014) has had an eventful year so far. In early January, Tesla share prices breached the $500 mark for the first time since the company started trading back in 2010. Prices continued to climb and surpassed $650 at the end of the month, following release of its Q4 2019 results. The car maker reported revenues that beat analyst’s estimates, with a 17% increase from Q3. It also projected to deliver at least 500,000 vehicles in 2020. Moreover, Tesla’s Q4 update disclosed that the company started production of the Model Y electric all-wheel-drive crossover during January, months before schedule. CEO Elon Musk has said the Model Y could be Tesla’s best-selling vehicle.

In addition to being the most traded stock out of the countries that we are active in, Tesla saw the biggest price increase, ending the month 53.26% up.

On the other end of the spectrum, FuelCell Energy (ISIN: US35952H6018) had the biggest decrease, with a -74.21% change in price. Its Q4 results showed revenues and earnings lower than what was anticipated. If you are unfamiliar with the company, FuelCell is a small cap company with a market capitalisation of $335.44 million. The company is engaged in everything from the design to the installation of fuel cell power solutions. Some of their customers include Pfizer, ExxonMobil, and Toyota.

Would you like to add one of the companies you see on the map to your portfolio? Would adding one of these companies to your portfolio help to diversify it? With DEGIRO, a diversified portfolio is easily obtainable with access to more than 50 exchanges across 30 different countries. In addition to our global reach, we also offer investing with incredibly low fees so the impact of transaction costs on your return is minimised.

Most traded stocks by country: December