Most traded stocks by country: June 2020

The end of June marks the end of another month of trading as well as the second quarter. European and American markets posted gains for the third month in a row after the market crash in March. The EURO STOXX 50 and S&P 500 ended June up by 6.03% and 1.84% respectively. Taking the full quarter into account, the EURO STOXX 50 has increased by 16.05% and the S&P 500 had its best quarter in over 20 years, surging by nearly 20%. However, both indices are still at lower levels from the beginning of the 2020, with the EURO STOXX 50 and S&P 500 down by 13.65% and 4.04% respectively.

In this article, we share the sector that was traded the most and June’s biggest winner and loser. 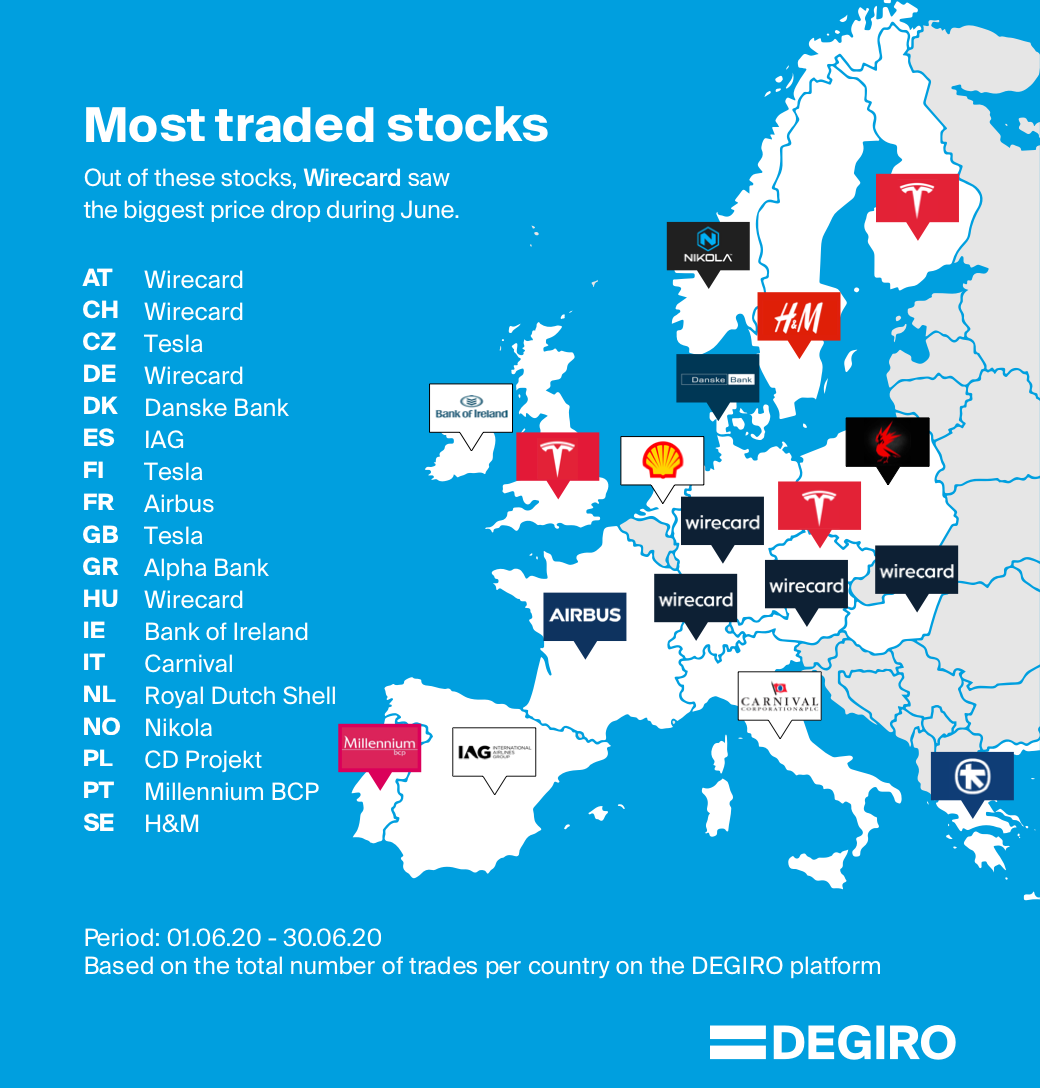 For the first time in months, Tesla was not dominant on the map causing the automotive sector to be the most traded one. Instead, it was the financial sector with the most traded stock of eight countries stock falling in this category. Wirecard accounted for half of these and the remaining four were banks, including Danske Bank, Alpha Bank, Bank of Ireland and Banco Comercial Português.

Due to the economic impacts of COVID-19, many banks have been financially affected and for some, downgrades in credit ratings have been made. S&P Global reported in June that the negative rating momentum has slowed since May. However, a clearer picture will be made once second quarter results are published. It also noted that banks’ strengthened balance sheets over the past 10 years and assistance from governments to households and corporate markets could help to limit negative ratings.

The companies that saw the biggest price movement during June were Nikola Corporation and Wirecard. Nikola was the winner this month, ending the month up by 135.30%. Wirecard was on the other end of the spectrum, with prices dropping by 93.94%.

Nikola is an American electric vehicle and hydrogen truck maker. Nikola went public on 3 June in a reverse merger with VectoIQ Acquisition Corp. On its third day of trading, stock prices soared by 104%.

The company does not have any trucks on the market yet or any reported revenues but anticipates its first sales in 2021. However, its chairman and founder, Trevor Milton, said that the company has begun taking preorders that are worth over $10 billion. In 2019, in a round of fundraising, it was valued around $3 billion. As of the end of June, its valuation has significantly grown with a market cap of $24.37 billion.

It may not come as a surprise to most that Wirecard, a German electronic payment solutions provider, was the biggest loser out of the stocks on the map.

Wirecard’s accounting practices have been under scrutiny and investigation for months. On 18 June, the company announced that €1.9 billion in cash was ‘missing’ from its accounts and it failed to publish its 2019 results as planned. This significant figure represented around a quarter of Wirecard’s balance sheet. Shares plunged more than 60% after the public was made aware, wiping away €8 billion in market cap. CEO at the time, Markus Braun, resigned a day later and was arrested on 23 June on allegations of market manipulation and suspicion of false accounting. The fintech company filed for insolvency at the end of the month, leading to a 93.94% drop in share prices. At the time of writing, employees have yet to receive their June paychecks.

Wirecard’s main listing is on the Börse Frankfurt. An issuing company needs to repeatedly fail to present annual results to be delisted from this exchange. Bloomberg said at the end of June that Wirecard is unlikely to delist at this time as it has only failed to present one annual report so far.

Would you like to invest in a company that you see on the map? For all stocks trading on US exchanges, we offer the low fee of €0.50 + $0.004 per share. Fees vary for all other exchanges. For details, please visit our Fees Page.

In addition to these, DEGIRO offers a multitude of other companies and financial products to invest in on more than fifty exchanges across thirty countries. For details, please visit our Products and Markets page.

Most traded stocks by country: May 2020