Most traded stocks by country: March 2020

The spread of COVID-19 has had an unprecedented impact on day-to-day living, businesses and financial markets on a global scale. While stock markets have seen effects of the virus since the beginning of the year, March, in particular, proved to be a turbulent time. The EURO STOXX 50 ended the month with a 16.30% decrease and the S&P 500 was down 12.51%. Out of the stocks seen on the map, only CD Projekt Red had a positive change in price at the end of the month. 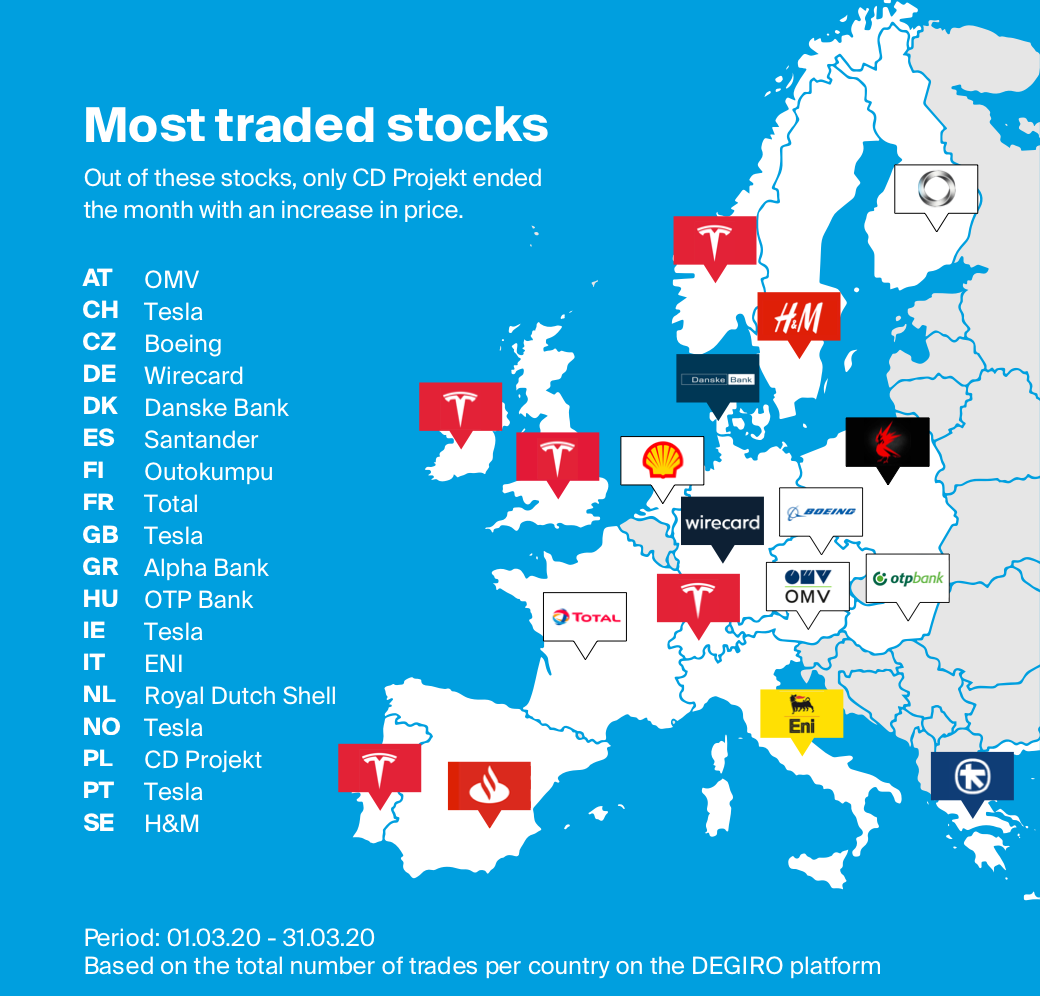 As Tesla was the most traded stock in five of the eighteen countries that we are active in, the automotive sector was again the most traded. Earlier in the year, share prices of Tesla were record-breaking, surpassing the $900 mark for the first time. Like many other stocks, the carmaker saw price drops in March and ended the month down 21.56%.

In response to the spread of the coronavirus, Tesla suspended production at its California-based plant in March and also began offering a touchless delivery option in select locations. It is estimated that there was a 30% decrease in deliveries in Q1 2020 compared to the last three months of 2019. However, it is expected that the pandemic is impacting demand for all automakers, not just Tesla.

Many auto plants worldwide are either slowing production or implementing temporary closures. For example, Volkswagen, Renault, PSA Group, Fiat Chrysler, Ferrari, BMW, Toyota and Honda have all implemented temporary closures in at least one of their Europe-based plants.

The auto industry has also made significant efforts in the fight against COVID-19 by producing much-needed health care supplies and equipment. Industrial mobilisation of this nature has not been seen since WWII. Some examples of companies stepping up are:

The stock that saw the biggest change in price at the end of March was Boeing, with a 45.79% decrease. With businesses shutting down, travel bans and populations around the world making efforts to control the spread of COVID-19, the demand for air travel has significantly dropped. At the beginning of March 2020, the International Air Transport Association estimated that the global airline industry could experience losses of up to $113 billion by the end of the year. The impact of the virus has spread beyond airlines. Plane makers, like Boeing, are also seeing its effects.

In order to provide relief to workers, businesses and the economy, the US government passed a $2 trillion stimulus package. Of this, roughly $500 billion will go towards the aerospace industry. Boeing has requested $60 billion for it and its suppliers. The plane producing giant indicated that without government support, it will not be able to meet liquidity needs.

As a result of the pandemic, Boeing has been scaling back. For one, on the 23rd of March 2020, Boeing announced that it would be temporarily suspending production operations at its Puget Sound area facilities in Washington. Nearly half of Boeing’s global workforce is located in the Puget Sound. Additionally, the CEO and Board Chairman will not be paid for the remainder of the year. The company has also suspended its dividend and extended its pause of any share repurchasing until further notice.

During these unprecedented times, we at DEGIRO hope that you and your loved ones stay well and we are working as hard as possible to minimise disruptions in our service. More information about this can be found here.

Most traded stocks by country: February 2020

The impact of COVID-19 on markets and DEGIRO