Most traded stocks by country: May 2022

And just like that, we’ve come to the end of another month of trading. The markets in May were full of ups and downs, but they ended up relatively in the same place as they started. The EURO STOXX 50 ended slightly down by 0.36%, and despite briefly entering into bear territory on May 20th, the S&P 500 saw a 0.01% increase. Since the beginning of the year, the EURO STOXX 50 and S&P 500 are down by 11.85% and 13.30%, respectively. 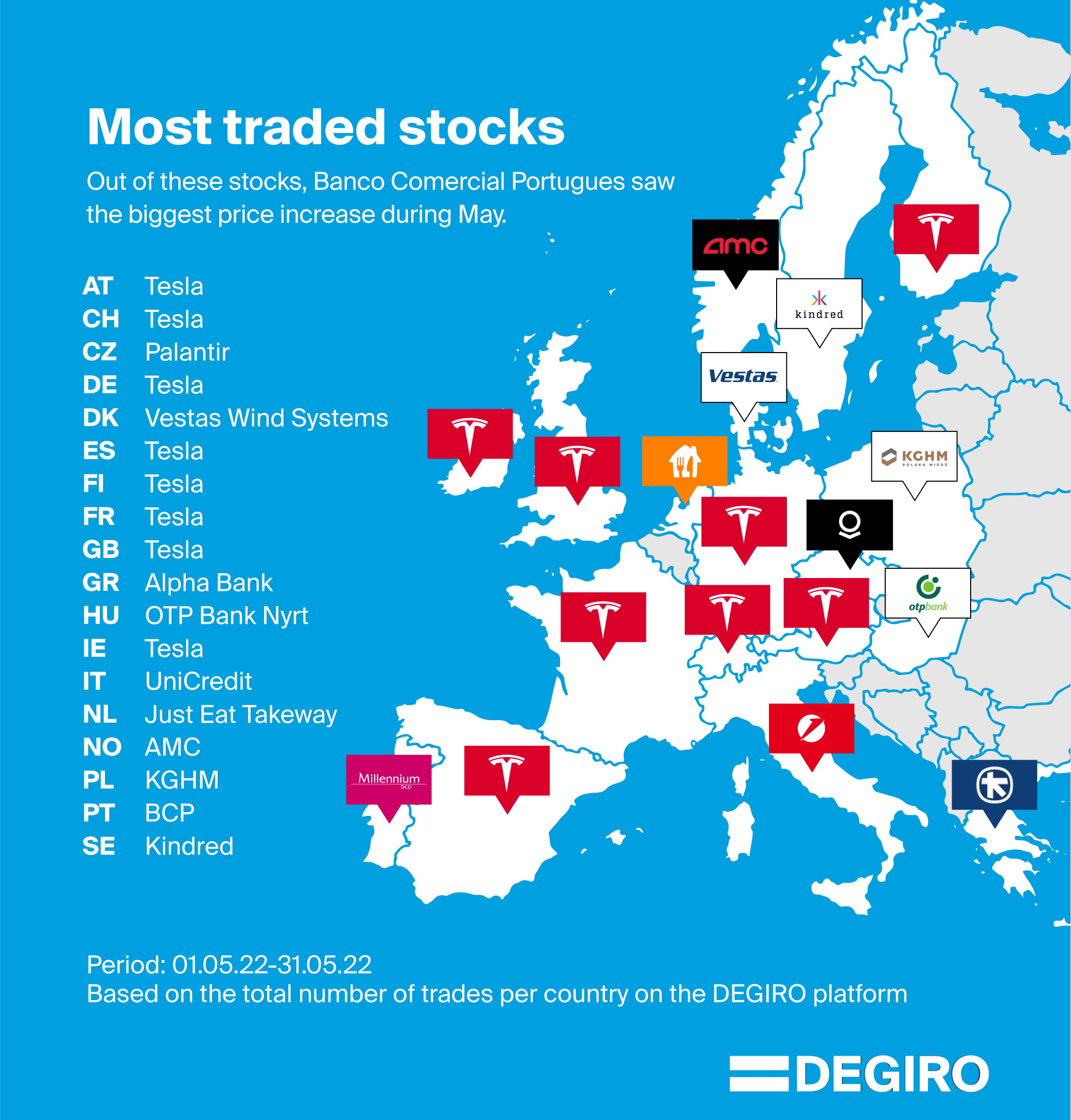 In May, two companies made their debut on our map, being traded the most for the first time. Since they are new names, here’s a brief introduction of each:

UniCredit is an international banking group headquartered in Italy. Its core markets are in Italy, Germany, Central and Eastern Europe, and it provides services to over 15 million customers worldwide.

UniCredit is one of few western banks with significant operations in Russia. After Russia invaded Ukraine in February, UniCredit’s stock price tumbled, and merger talks with Commerzbank were shelved. While its stock price is still down from the beginning of the year, it ended May up by 22.47%. Prices began to rally after the company announced on May 10th that it would soon start its €1.6 billion share buy-back program that was at risk due to Russia’s invasion.

KGHM is a Polish company involved in the extraction and processing of natural resources, such as copper, rhenium, gold and silver, among others. The company mostly operates in Poland, Canada, Chile and the US. It is one of the biggest stocks on the Warsaw Stock Exchange, with a market cap of €6.34 billion. KGHM was one of four stocks on the map that saw price increases in May, ending the month in the green by 0.41%.

The companies that saw the biggest price movements out of the stocks on the map last month were Banco Comercial Portugues and Just Eat Takeaway.com.

Banco Comercial Portugues’ 29.59% price increase last month made it last month’s winner. Its stock price was relatively flat for the first half of May but saw a significant upward incline after releasing its earnings for the first quarter on May 16th. Banco Comercial Portugues reported a net income of €112.9 million, almost doubling its net income from the same period year-over-year.

Dutch food delivery company Just Eat Takeaway saw the biggest price drop, with a 20.95% drop. Its stock price is down by 57.12% since the beginning of the year, and it has been a bumpy road.

In addition to orders decreasing since the online food ordering boom at the height of the pandemic, the company has been under scrutiny from shareholders due to its acquisition of its US arm Grubhub, which it bought last year for $7.3 billion. In response, Just Eat Takeaway has proposed selling it, which would be at a loss as Grubhub’s value now stands at just over $5 billion.

More recently, at the beginning of May, Just Eat Takeaway announced a supervisory chairman Adriaan Nuehn would not be reappointed. Also, its COO, Joerg Gerbig, was under investigation due to possible personal misconduct at a company event and that he would be leaving the company.

We want to make investing accessible to everyone by offering investing with incredibly low fees. For details, please visit our Fees page.

We help you spread your risk by offering you access to one of the largest universes and exchanges. You can influence your risk by building a well-diversified portfolio and spreading your investments over different types, regions and sectors. For an overview of the products and exchanges we offer, please visit our Markets page.

Most traded stocks by country: April 2022

Most traded stocks by country: March 2022