At the end of every month, we take a look at the performance of the EURO STOXX 50, the sentiment that was reported by clients in the app, and the most traded stocks through our platform. 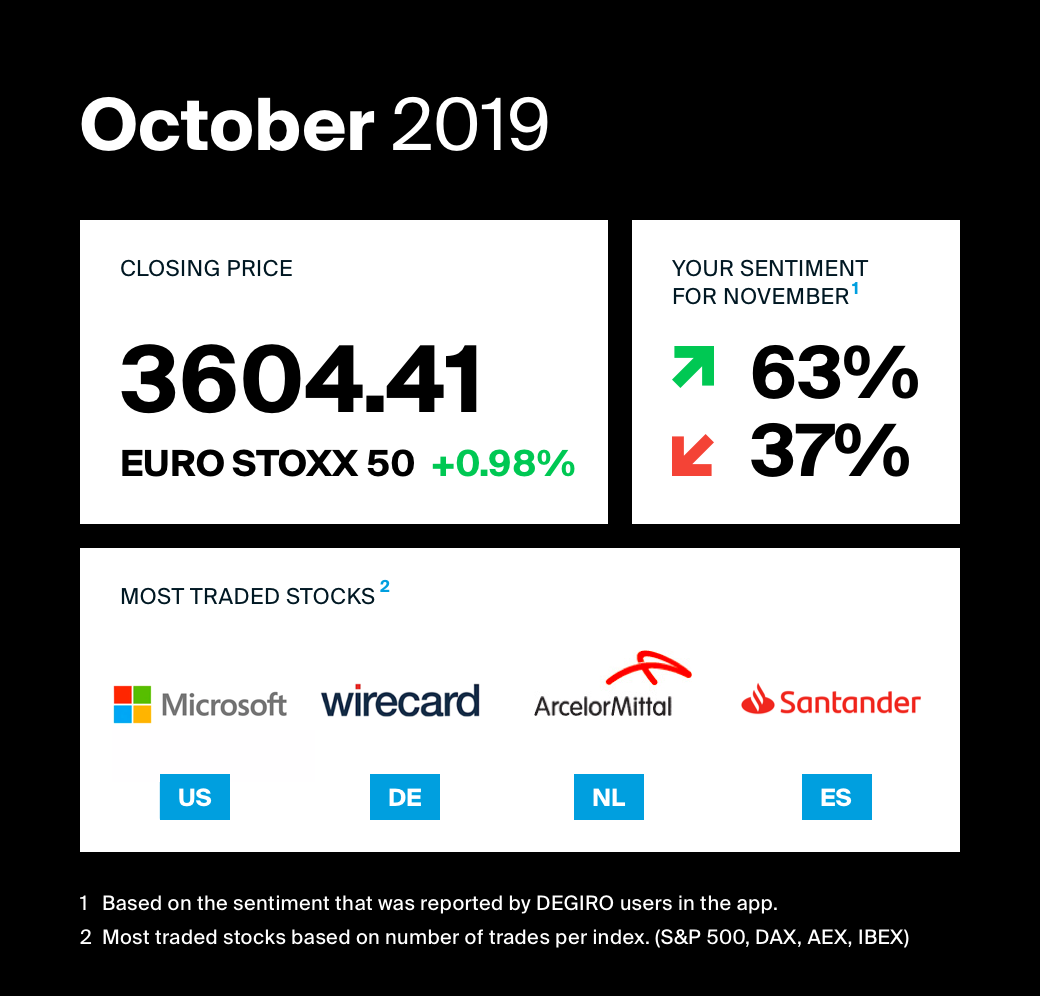 The most traded stocks through DEGIRO this month were Microsoft, Wirecard, ArcelorMittal, and Santander. These are the top traded based on number of trades per index on the S&P 500, DAX, AEX and IBEX.

For the first time, Microsoft (ISIN: US5949181045) was the most traded US stock on the DEGIRO platform. This month, the US Defense Department awarded Microsoft with a 10-year, $10 billion cloud computing contract called JEDI (Joint Enterprise Defense Infrastructure). This was a major victory for Microsoft and its cloud computing software, Azure. In the running was tough competition including Amazon, Google, IBM, and Oracle. Some expected Amazon to come up on top, as Amazon’s Web Services (AWS) currently holds about 32% of the cloud computing market to Microsoft’s 18%. The Monday following the US Defense Department’s decision, shares of Microsoft rose more than 3% to a record high of $145.67.

ArcelorMittal (ISIN: LU1598757687) was the top traded Dutch stock for the second consecutive month. This month, the steel giant spoke out about a proposed EU carbon border tax. The carbon border tax is designed to protect EU firms from competitors outside of the EU where climate protection regulations are less strict. ArcelorMittal’s Europe Flat Products CEO Geert Van Poelvoorde commented on this tax saying that it is a fair way for every country to do its part in reducing CO2 emissions. Without this, Van Poelvoorde said that steelmakers would not be able to compete. Arcelor also noted that further policy incentives would be needed to implement cleaner technology in its testing and that green steel is expected to be more expensive in the long term.

Spanish multinational bank, Santander (ISIN: ES0113900J37), was the most traded Spanish stock this month. The company released its Q3 results at the end of the month, which disclosed a 75% decline in net profit from the same quarter in 2018. Santander said that the profit decrease was primarily attributed to one-off charges in the UK for goodwill impairment. Although there was an overall decline in net profit, Santander still saw underlying profit growth in 8 of their 10 core markets in Q3 year-over-year.

Would you like to invest in Microsoft, Wirecard, ArcelorMittal, or Santander? Would adding one of these companies to your portfolio help to diversify it? With DEGIRO, a diversified portfolio is easily obtainable with access to more than 50 exchanges across 30 different countries. In addition to our global reach, we also offer investing with incredibly low fees so the impact of transaction costs on your return is minimised.