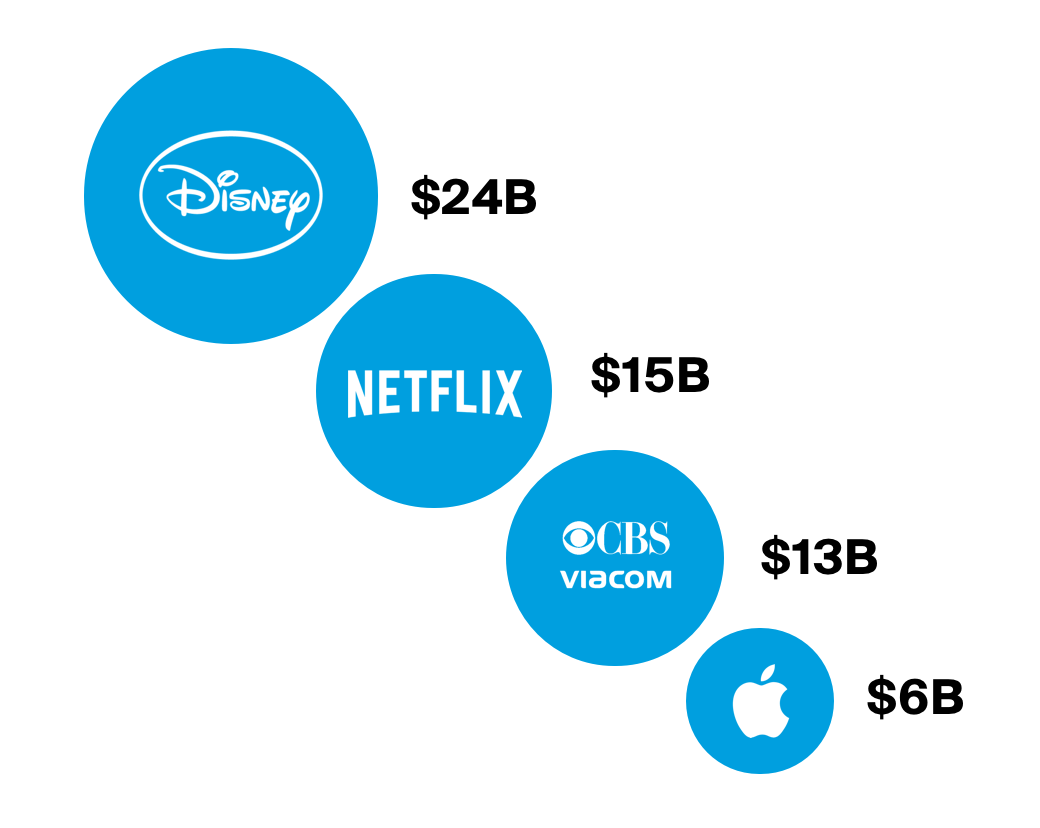 The start of something new

Netflix has led us from renting movies out-of-home and having a limited selection, to streaming endless options anywhere on any device. One of Netflix’s main features is that it offers almost unlimited content, which was unheard of only 10 years ago. The start of Netflix dates back to 1997 in California (USA). Creators Reed Hastings and Marc Randolph had the idea of setting up an online video store. Initially, they offered a mail-order rental service. Subscribers could choose from a broad catalogue with movies and series that would be sent to your house.

In May 2002, Netflix became publicly traded, through an initial public offering (IPO) with a value of $1.21 per share. In 2007, they launched their now world-famous online streaming service. Users no longer had to wait for their DVD to arrive by mail, but rather received it almost instantly. That was the key to their success. Currently, Netflix has over well over 150 million subscribers.

The old hand in the profession

The Walt Disney Company, on the other hand, has been creating stories since 1923. It all started with one cartoon called Alice’s Wonderland. Not long after, the world-famous Micky Mouse was ‘’born’’ and the rest is history. Disney first issued stock (as Walt Disney Productions) in 1940. This was traded over-the-counter at the time. In 1957, Goldman Sachs led the IPO of The Walt Disney Company at a price of $13.88 per share on the New York Stock Exchange. The Walt Disney Company’s Disney+ is officially launching in November, and their sizable content budget shows that they are heavily invested in this industry.

Some key dates and figures

Partnering up or streaming war

With its 21 Century Fox, Marvel, and Pixar (to name a few), Disney is an important content provider for Netflix. The Walt Disney Company broke the deal with Netflix in a public declaration of war. They stopped licensing films to the patriarch of streaming services. Instead, Disney will show them on its own Disney+. Leaving the deal is not so easy though. The current deal states that every movie released between January 2016 and December 2018 will be back on Netflix starting around 2026. So, it seems like Disney and Netflix will be partnering up a little longer.

Netflix is listed on the American NASDAQ, under the ticker NFLX. Their market capitalisation is $129.15 billion and their price-to-earnings ratio (P/E) is currently at 115.68, both per 08/27/2019. Netflix’s earnings before interest, taxes, depreciation and amortisation (EBITDA) for the quarter ending June 30, 2019, was $5.1 billion. This is a 25.53% increase year-over-year. Also add that Netflix has never distributed dividends since its IPO.

The Walt Disney Company is listed on the American NYSE, under the ticker DIS. Their market capitalisation is $242.48 billion and their price-to-earnings ratio (P/E) is currently at 24.41, both per 08/27/2019. Disney’s earnings before interest, taxes, depreciation and amortisation (EBITDA) for the quarter ending June 30, 2019, was $3.9 billion. This is a 16.37% decline year-over-year. 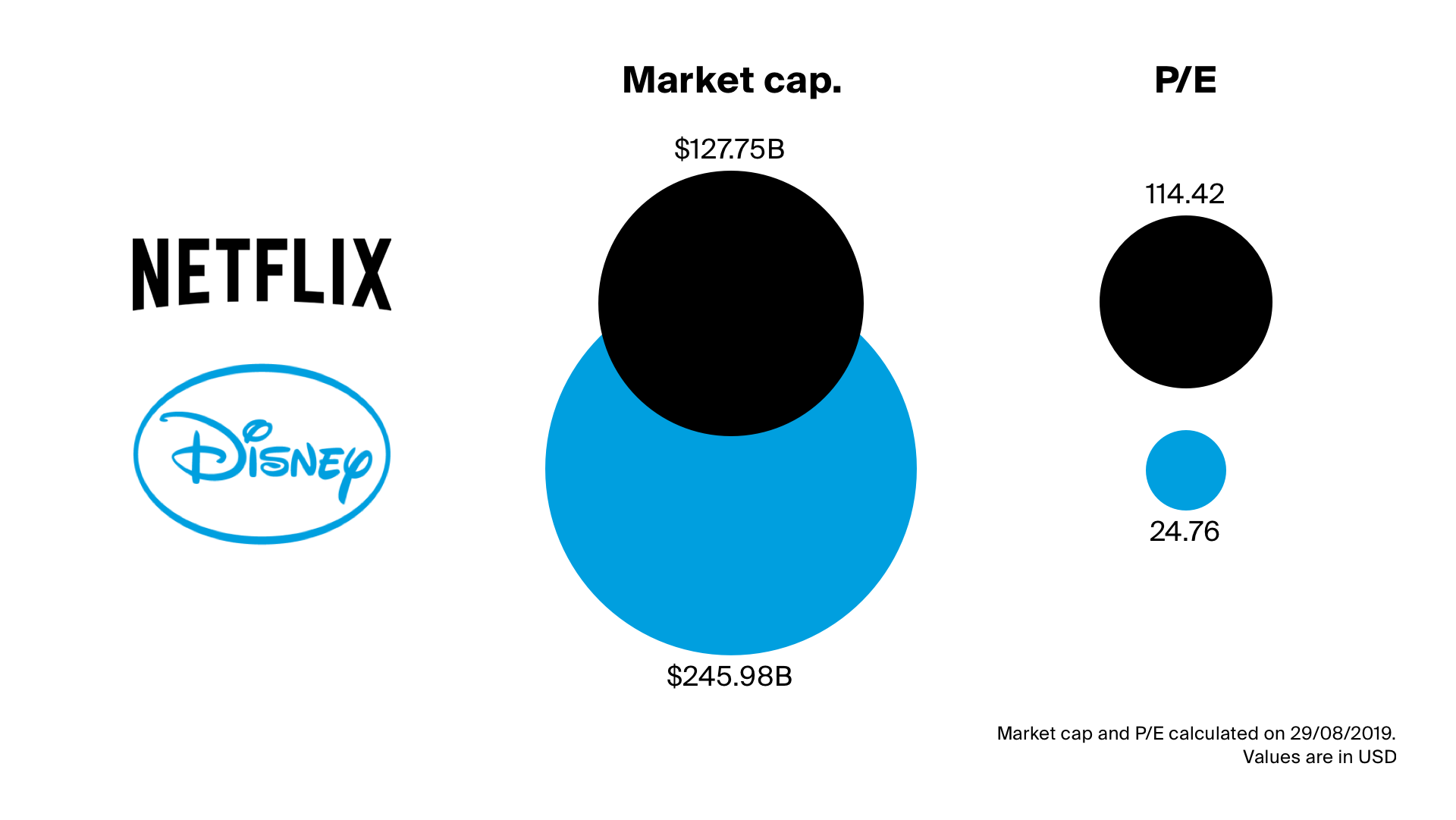 Although Netflix is the known player in this industry and Disney is coming in hot, we can’t forget about the rest of the competition in this market. In order to compete with the giants in this market, CBS and Viacom will merge together creating ViacomCBS Inc., creating a company with an approximate $30 billion market value. ViacomCBS is said to have a $13 billion content budget. Another big player, Apple, is planned to release their streaming service Apple TV + in November 2019, with reported $6 billion content budget. Other companies such as AT&T and Amazon have not published their content budgets, but will also be fighting for market share in this fast-growing industry.

Are you investing in any of these media giants?

No doubt, people who invested in Netflix back in 2002 aren’t sorry they did. The company started trading publicly at about $1.20 per share. As per 18/09/19, Netflix’s stock price is around $300 per share. The announcement of Disney+ caused Disney’s stock to go up 12%, making it its best day since May 2009. Would adding Netflix, Disney, CBS Viacom or Apple to your portfolio help diversify it? Find out what investing in the streaming industry can do for your portfolio. For all US shares on the platform, we offer the low fee of €0.50 + $0.004 per share.

10 fun facts about trading on the US markets