What you should know about SPACs

An increasingly popular alternative way to take companies public is via a special purpose acquisition company (SPAC). If you are not familiar with SPACs, perhaps you have heard of Virgin Galactic, Nikola or DraftKings, which have all taken the SPAC route to go public.

In this article, we provide background information about SPACs and discuss how much they have grown in popularity in recent years.

What is a SPAC?

SPACs are companies that go public to raise capital in order to acquire or merge with existing companies. They are also known as ‘blank check companies’ because they often do not have a stated target for acquisition when they are formed. Initial public offering (IPO) investors therefore do not know the company that they will ultimately be investing in. SPACs also do not have any existing business operations at the time of their IPO.

How does a SPAC work?

Proceeds from the IPO are then held in a trust and will be used at a later date for an acquisition. Following the IPO, the SPAC will typically have two years to name a company to acquire and complete the acquisition. If the acquisition is not complete within the given timeframe, assets in the trust are liquidated and returned to shareholders.

In the event that investors do not like the planned acquisition, they can sell their shares but they get to keep the warrants. Therefore, if an acquisition goes better than the investor that opted out expected, the investor can buy more shares by turning in their warrants and putting up a fixed price per share, typically $11.50, at some point in the future. This can be attractive for those that believe that share prices of the resulting company from the SPAC acquisition will increase after it goes public.

After the acquisition takes place, the SPAC’s symbol and name will often change and reflect the company that was acquired. Terms of the warrant will remain the same, but they will be convertible to shares under the new name and symbol.

What is an example of a SPAC?

To further your understanding of what a SPAC is and how it works, we will use one of the more high-profile SPACs as an example. In 2017, a shell company called Social Capital Hedosophia (SCH) began trading under the ticker IPOA.

How have SPACs grown in popularity?

The first recorded listing of a SPAC dates back to 1993 but only recently have they gained a lot of traction. According to Bloomberg, SPACs raised about $41 billion from the beginning of the year to the end of September. For perspective, that is more than the amount raised in the last ten years combined. Out of the $41 billion, about $29 billion has been raised since July 1st. Bloomberg also noted that SPACs have accounted for around 40% of this year’s IPO volume. 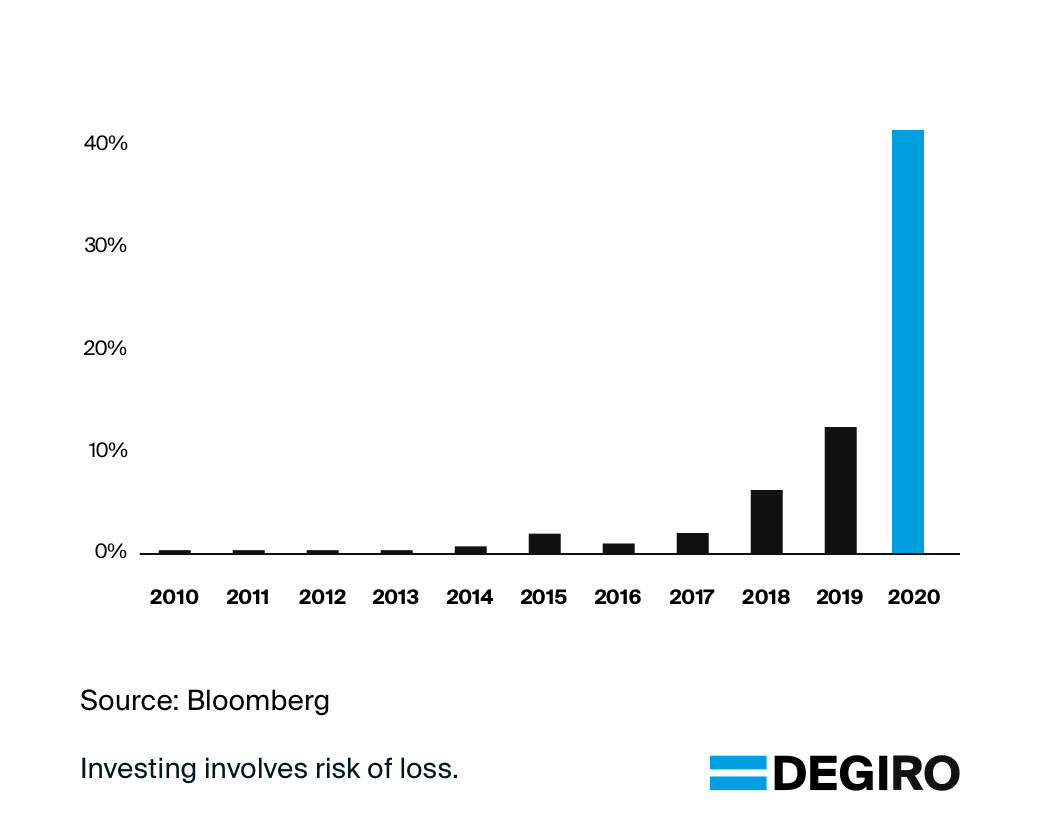 With a DEGIRO account, you can invest in a multitude of financial products, on more than fifty exchanges across thirty countries. For details, please visit our Products and Markets page.